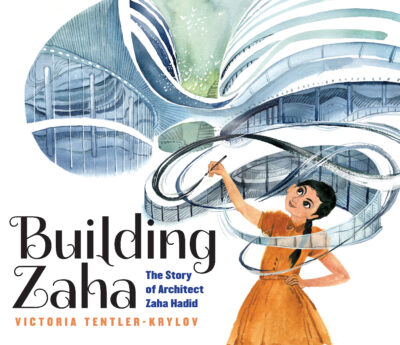 The city of Baghdad was full of thinkers, artists, and scientists, the littlest among them Zaha Hadid. Zaha knew from a young age that she wanted to be an architect. She set goals for herself and followed them against all odds. A woman in a man's world, and a person of color in a white field, Zaha was met with resistance at every turn. When critics called her a diva and claimed her ideas were unbuildable, she didn't let their judgments stop her from setting goals and achieving them one by one, finding innovative ways to build projects that became famous the world over. She persisted, she followed her dreams, and she succeeded.
Victoria Tentler-Krylov

Debut author-illustrator Victoria Tentler-Krylov is herself a practicing architect. She says of her inspiration, "My art explores children's fantasies in a painterly way. And, much as children love to do, so my illustrations also tend to shift between the real and the imagined worlds." She lives in Boston. Visit her online at cargocollective.com/victoriakrylov.