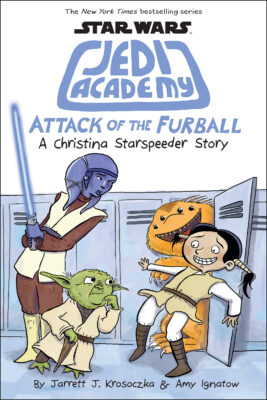 Attack of the Furball

As told through a mix of comics, doodles, and journal entries, it's a new year at Jedi Academy! Christina Starspeeder made it through her first year at the advanced Jedi Academy . . . Barely . . . And year two isn't looking any easier! Christina still apprentices under Jedi Master Skia Ro while enduring the non-stop sass from droid Q-13. But this year, she has to balance her studies with constant travel, accompanying Skia Ro on non-stop trips to new worlds full of cool creatures. And those cool creatures are the start of all Christina's problems this year.

When working on the planet Cholganna, Christina falls in love with a baby nexu - a cat-like creature who's fluffiness is impossible to resist. But when she sneaks the nexu - named "Fluffernut" - back into the dorms, Christina slowly begins to realize why it's never a good idea to take wild animals for pets. Fluffernut begins growing and growing - she'll eventually grow to be 14 feet long and 3 feet tall! Plus, she's chewing up EVERYTHING in sight. And if that weren't bad enough, a mysterious bounty hunter seems to be on her trail, trying to steal Fluffernut back. Can Christina escape this jam without getting thrown out of Jedi Academy? Or will this be the end of her Jedi Academy career?
Amy Ignatow

Amy Ignatow is the author and illustrator of The Popularity Papers series and The Mighty Odds, the first book in the Odds series. The first book in The Popularity Papers series was selected as a top-ten title for 2011 by the American Library Association's Rainbow Project, was a 2010 Gold Award winner by the National Parenting Publications Association, and was selected by the Chicago Public Library as one of the 2011 "Best of the Best" books. Amy lives in Philadelphia with her family, eight fish, and a cat named Dr. Josephine Frimplepants.