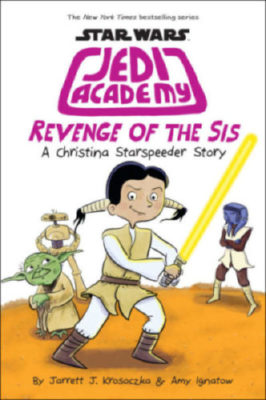 Revenge of the Sis

Christina Starspeeder, legendary Padawan and sister to Victor Starspeeder, has graduated from the Jedi Academy at Coruscant. But that doesn't mean her education is over! Just the opposite. Now Christina is a student at the advanced Jedi Academy at Jedha City. It's super big, and super stressful. At Coruscant, Christina was top of her class. But at this new school, it seems like everyone is on a different level. To make matters worse, she's apprenticing under legendary Jedi Skia Ro, whose droid seems to have it out for Christina. Since when did droids come preprogrammed with attitude? Every time Skia Ro gives Christina a task, she manages to screw it up. Can Christina step it up at this new school? Or will she get booted out to the outer rim? Find out in this all-new volume of the New York Times bestselling series Star Wars: Jedi Academy!
Amy Ignatow

Amy Ignatow is the author and illustrator of The Popularity Papers series and The Mighty Odds, the first book in the Odds series. The first book in The Popularity Papers series was selected as a top-ten title for 2011 by the American Library Association's Rainbow Project, was a 2010 Gold Award winner by the National Parenting Publications Association, and was selected by the Chicago Public Library as one of the 2011 "Best of the Best" books. Amy lives in Philadelphia with her family, eight fish, and a cat named Dr. Josephine Frimplepants.

--- - ! 'As told through a mix of comics, doodles, and journal entries, Christina Starspeeder takes us on a new adventure at an all-new Jedi Academy campus! There are unfamiliar faces and old ones too, but one thing remains the same: Jedi Academy is full of laughs and warm moments that fans and readers discovering the series for the first time will love.'