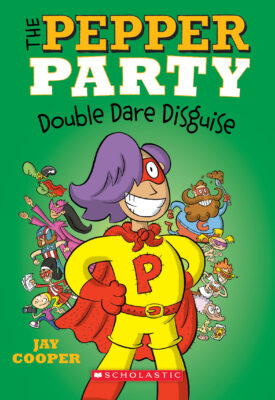 Meet the Peppers. Funny runs in the family.

Megs Pepper has been grounded! But she can't miss San Pimento's ComicCon and a chance to meet her favorite superhero, Diana Pence the Unstoppable Unicorn Woman. So Megs dons a makeshift costume and sneaks out of the house. And when she foils a would-be purse snatcher, Diana makes Megs her new sidekick. Things are looking extra-super until a villain called the Poker shows up and challenges Megs and her newfound heroism. It'll take Megs, Diana, and all of the Peppers with their truly terrifying superhero alter egos to take down this super baddie once and for all.
Jay Cooper

Jay Cooper has worked as a creative director and designer of magazines, books, apparel, and advertising for two decades. He's had the good luck to design covers for New York Times bestsellers as well as literary classics, and the even better luck to work on art and advertising campaigns for over 100 Broadway musicals and plays. However, nothing makes him happier than returning to his literature-loving roots and creating and illustrating stories for kids. He lives with his wife and children in Maplewood, New Jersey.