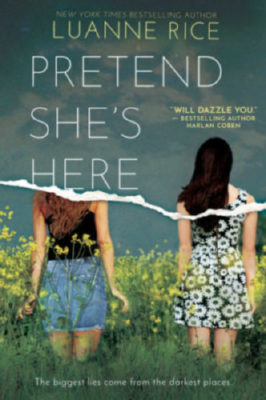 When Lizzie's parents and her sister come back to town to visit, Emily's heartened to see them. The Porters understand her pain. They miss Lizzie desperately, too.

Desperately enough to do something crazy.

Suddenly, Emily's life is hurtling toward a very dark place -- and she's not sure she'll ever be able to return to what she once knew was real.

From New York Times bestselling author Luanne Rice comes a breathless, unputdownable story of suspense, secrets -- and the strength that love gives us to survive even the most shocking of circumstances.
Luanne Rice

Luanne Rice is the New York Times bestselling author of 34 novels, which have been translated into 24 languages. The author of Dream Country, Beach Girls, The Secret Language of Sisters, and others, Rice often writes about love, family, nature, and the sea. She received the 2014 Connecticut Governor's Arts Award for excellence and lifetime achievement in the Literary Arts category. Several of Rice's novels have been adapted for television, including Crazy in Love for TNT, Blue Moon for CBS, Follow the Stars Home and Silver Bells for the Hallmark Hall of Fame, and Beach Girls for Lifetime. Rice is an avid environmentalist and advocate for families affected by domestic violence. She divides her time between New York City and Old Lyme, Connecticut. Visit her online at luannerice.net.

"Oh, but, sweetie -- I always brought juice when I picked you up from school."

It jostled me to be called “sweetie” -- that''s what she''d always called Lizzie. But my heart was aching for Mrs. Porter. It must have been intense to be talking to me -- the first time since Lizzie''s funeral.

"Have some," Chloe said, handing me an ice-cold pack of orange-mango juice. Perfect, I thought -- Lizzie''s number one choice. I slugged some down. A few drops spilled on the beige seats. I wiped them up with the sleeve of my green army jacket.

"Pretty good," I said. "I have an English test tomorrow. Lots of homework . . ." At that second, I realized that in the excitement of seeing Chloe, I''d left my backpack next to the stone wall. "Oh, could we go back a sec, actually, I forgot . . ." I started to say.

"Lizzie, English was always your best subject," Mrs. Porter said. "You''ll have nothing to worry about. A poet, that''s what I always said of you. My girl, the poet."

"It''s better we start right now, sweetie," Mrs. Porter said. "No going back, no being stuck in old ways. You''ll get used to it. We already have, haven''t we, Chloe?"

"Yeah," Chloe said, looking away from me, out the window.

"Used to what?" I asked. I felt a tiny bit sick to my stomach -- not the most unusual thing in the world. I was known to get carsick, but not usually right here on the sleepy country lanes of my hometown.

"True, we''re just like sisters," I said. I looked across the seat at her, but she was still staring out the window. That''s when I noticed we had driven past the cemetery. We were at the stop sign, about to turn onto Shore Road.

Nausea bubbled up in me. I was going to be sick. "Please, could you pull over?" I asked. No one replied. Mr. Porter just drove faster, past the gold-green salt marsh. "Stop," I said, feeling dizzy.

Mr. Porter didn''t, though, and no one spoke. I saw the traffic light looming -- once we went through we''d be on I-95, the interstate heading to wherever -- and my head spun with the fact that these were people I loved, trusted as much as anyone, but who were acting so bizarre. This couldn''t be happening -- I didn''t even know what "this" was, but my gut was telling me it was now or never. This was my chance. We stopped at the red light. I grabbed the handle and pulled, trying to yank open the door. Nothing happened.'