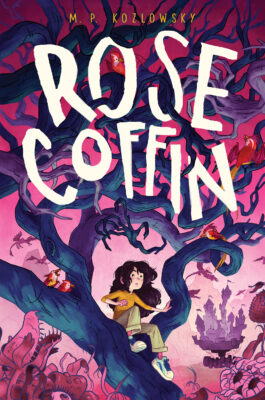 After a particularly mortifying incident, Rose escapes to the woods where she's captured by a group of otherworldly creatures. They take her to Eppersett-a magical, eerily beautiful place where cemeteries are full of dead dreams, moving castles roll along on tracks, and most shocking of all . . . people seem to love Rose at first sight. They tell her that she's "the one they've been waiting for. The one who's going to save them." An evil force called the Abomination is on the loose, and there's only one thing powerful enough to stop it-her voice.

There's just one catch. Rose hasn't been brought to Eppersett to fight the Abomination.

She's going to be sacrificed to it. She's the chosen one all right . . . the one who's been chosen to die.

In this startlingly original fantasy, M.P. Kozlowsky takes readers on a journey like no other-an adventure that'll transform everything you thought you knew about friendship, love, and the true power of finding your voice.
M. P. Kozlowsky

M.P. Kozlowsky is the author of two middle-grade novels, Juniper Berry and The Dyerville Tales. Frost is his first novel for Young Adults. He lives in Westchester, New York, with his wife and two daughters.