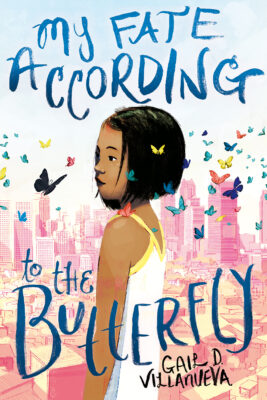 My Fate According to the Butterfly

When superstitious Sab sees a giant black butterfly, an omen of death, she knows that she's doomed! According to legend, she has one week before her fate catches up with her -- on her 11th birthday. With her time running out, all she wants is to celebrate her birthday with her entire family. But her sister, Ate Nadine, stopped speaking to their father one year ago, and Sab doesn't even know why.

If Sab's going to get Ate Nadine and their father to reconcile, she'll have to overcome her fears -- of her sister's anger, of leaving the bubble of her sheltered community, of her upcoming doom -- and figure out the cause of their rift.

So Sab and her best friend Pepper start spying on Nadine and digging into their family's past to determine why, exactly, Nadine won't speak to their father. But Sab's adventures across Manila reveal truths about her family more difficult -- and dangerous -- than she ever anticipated.

Was the Butterfly right? Perhaps Sab is doomed after all!
Gail Villanueva

Gail D. Villanueva is a Filipina author born and based in the Philippines. She's also a web designer, an entrepreneur, and a graphic artist. She loves pineapple pizza, seafood, and chocolate, but not in a single dish together (eww). Gail and her husband live in the outskirts of Manila with their dogs, ducks, turtles, cats, and one friendly but lonesome chicken. Her debut novel, My Fate According to the Butterfly, was named a Best Book of the Year by Kirkus Reviews.

--- - “What do you want to do for your birthday, anyway? We can start planning it now!” My best friend, Pepper, kicks at the ground and swings, her brown hair trailing behind her.

My hand reaches for the locket on my chest as I start to answer Pepper, but I grasp air instead. I never take the locket off except to shower—I can't believe I forgot to put it back on this morning. It was from Dad. Unlike Ate Nadine, I value his gifts and actually use them. I let out a long sigh. "Birthday brunch at Lola Cordia's Garden Resort would be great."

Pepper stops swinging. "Your dead grandma's resort? The one your papa inherited?"

"Yeah." I wince. Maybe it's a cultural thing, that Pepper's more blunt and honest than any of my Filipino classmates. So, I just try to understand her.

"Your papa's there. And Wendell. Ate Nadine–"

"I know." I follow her lead and slow down my swing. Ate Nadine would rather drop dead than spend a second in Dad's company. But Pepper's brilliant. Nothing is impossible with her. "Can you come up with a plan to make it happen?"

"That's a tall order, Sab. Your sister's really stubborn." Pepper takes a lock of her hair and twirls it around a finger. "Don't worry. I'll think of something."

Pepper's biting her lower lip. I don't see her do that often, but when I do, it worries me. Because it almost always means she's worried too.

I force myself to smile as my sister heads our way. If Pepper isn't sure she can come up with a plan, I might as well accept this birthday reunion isn't happening. Ate Nadine will never speak to Dad, and it's just the way it is.