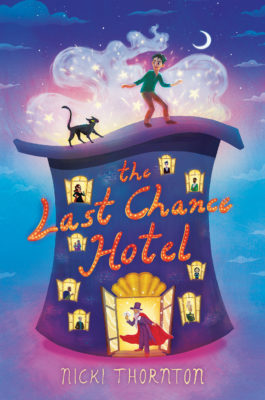 Seth is a kitchen boy at the remote Last Chance Hotel. His father has long ago left, leaving him imprisoned until he is old enough to set out on his own. If there's any hope he has, it's to be the greatest chef that ever lived... just like his father.

One night, a band of magicians begin to arrive to participate in a secret meeting -- a Prospect Selection Procedure to determine the most talented magicians in the world, judged by their leader Dr. Thallonius. Seth has one task: to make Dr. Thallonius the greatest dessert he's ever tasted. Then, maybe he will help Seth find a way to freedom.

But when the doors to the private meeting open, and Dr. Thallonius lay dead on the floor, the group blames the dessert, which means that it's Seth who will pay the price. But Seth knows he's innocent, and only has so much time to eliminate each suspect and prove his innocence.
Nicki Thornton

Nicki Thornton has run an independent bookshop in Abingdon, England with her husband for more than ten years. Her debut novel, The Last Chance Hotel, won the Times. /Chicken House Children's Fiction Competition 2016.