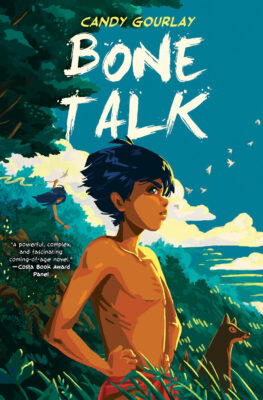 It is 1899. Ten year old Samkad thinks he knows everything about the world. He knows that home is in the mountains. He knows who his friends and his enemies are. And he knows that he will grow up to become a warrior like his dad, with his own shield, spear and axe.

His best friend is Little Luki and she too wants to become a warrior - though there's little chance of that because she is just a girl.

Then strangers arrive: a boy with many languages in his throat ... and weird-looking men called Americans who bring war and death.

Set during the U.S. invasion of the Philippines.

Endorsed by Amnesty International: "Amnesty International endorses Bone Talk because it upholds many human rights, including our rights to life, to equality, to have a religion, to enjoy our own culture. It also shows us what can happen when these are taken away from us."
Candy Gourlay

Candy Gourlay was born in the Philippines, grew up under a dictatorship and met her husband during a revolution. Growing up, she wondered why books only featured pink-skinned children who lived in worlds that didn’t resemble her tropical home in Manila. It took her years to learn that Filipino stories too, belong in the pages of books. Her novel Bone Talk was recently shortlisted for the Carnegie Medal and the Costa Prize – it is set in the moment when headhunting tribes in the Philippines come face to face with American invaders. Her picture book, Is It a Mermaid, lushly illustrated by Francesca Chessa, was nominated for the Kate Greenaway Medal. Her novels have also been listed for the Waterstones, the Blue Peter and the Guardian Children’s Book Prize. She lives in London with her family, where she wages war on the snails in her garden.

Dear Reader, The U.S. really did invade my native Philippines in 1899. Research was hard because that period was mostly written up, not by Filipinos, but by Americans, as tourists & conquerors. Some things in my book might shock you. War is shocking. Unfamiliar culture is shocking too. But it would have been disrespectful for me to edit out the beliefs of my characters. BONE TALK is for older middle grade (OMG!) interested in identity, culture clash, colonialism and erased/forgotten histories.

It will be enjoyed by fans of:

They Called Us Enemy by George Takei

Patron Saints of Nothing by Randy Ribay

Salt to the Sea by Ruta Sepetys

All the Light We Cannot See by Anthony Doerr