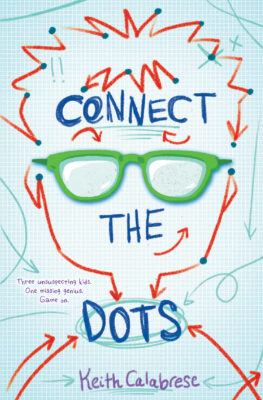 Is there anything more random than middle school? Sixth graders Oliver and Frankie don't think so. Their first few weeks have been full of weirdness -- lunchtime thievery, free beef jerky, and Matilda, the mysterious new girl who knows everything about them, but has a lot to learn about making friends.

But what if none of it is random at all? What if a reclusive genius is keeping an eye on them and making sure the tiny pieces of his puzzle fall into place, one by one, until strange, seemingly unconnected incidents snowball totally out of control? Imagine the odds! First a cardamom shortage takes down the school bully. Then a giant dog leads to some extracurricular spying. Soon Oliver is being followed and Matilda is hacking the FBI. And by the time they discover a gang of angry clowns and the world's largest game of Mousetrap, an insanely brilliant plan has been set in motion that will change their lives forever.

Connect the Dots is an intricately plotted story about the power of human connection and a chain of "coincidences" so serendipitous they must be destiny at work.
Keith Calabrese

Keith Calabrese is an author and screenwriter who holds a degree in creative writing from Northwestern University. A former script reader, he lives in Los Angeles with his wife, kids, and a dog who thinks he's a mountain goat.