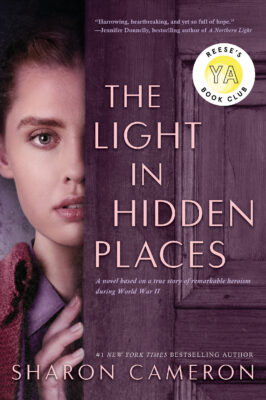 Light in Hidden Places, The

One knock at the door, and Stefania has a choice to make...

It is 1943, and for four years, sixteen-year-old Stefania has been working for the Diamant family in their grocery store in Przemsyl, Poland, singing her way into their lives and hearts. She has even made a promise to one of their sons, Izio -- a betrothal they must keep secret since she is Catholic and the Diamants are Jewish.

But everything changes when the German army invades Przemsyl. The Diamants are forced into the ghetto, and Stefania is alone in an occupied city, the only one left to care for Helena, her six-year-old sister. And then comes the knock at the door. Izio's brother Max has jumped from the train headed to a death camp. Stefania and Helena make the extraordinary decision to hide Max, and eventually twelve more Jews. Then they must wait, every day, for the next knock at the door, the one that will mean death. When the knock finally comes, it is two Nazi officers, requisitioning Stefania's house for the German army.

With two Nazis below, thirteen hidden Jews above, and a little sister by her side, Stefania has one more excruciating choice to make.

--- - I go to the door, pressing an ear to the wood before I turn the lock. The empty hall outside our room stretches to the other empty rooms of the empty apartment. As it should. Everything is as it should be.

And then a noise shoots through the silence. Louder than a gun. A grenade of fear inside my chest. And I know the sound I have missed.

Someone is knocking on my front door.

The words beat with my blood.

Another mattress spring pops, and I feel Helena coming up behind me. She doesn't speak. She is six years old and doesn't have to be told that this is not the time for questions.

The knocking comes again, louder, this time with a whisper through the cracks.

It's a trick. The Gestapo want me to open the door without a fuss. So they don't have to break it down. So they can give a nice, unblemished apartment to some nice German officer and his law-abiding wife with clean hair and mended stockings.

Maybe this means they will shoot us outside, like Mr. Schwarzer.

The Gestapo does not know me by that name.

I run for the door, hands out, fingers already searching for the newly repaired lock. I know it isn't him. It can't be him. But I fumble and twist at the lock anyway, then fling open the door. Helena gasps. Or maybe the gasp came from me. Because the bare bulb hanging in the hallway has shown me that it's not him. It's not who I thought it would be at all.