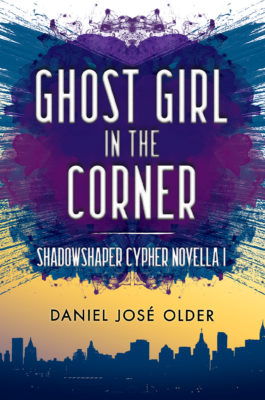 Ghost Girl in the Corner (The Shadowshaper Cypher, Novella 1) : null

Set between the New York Times bestseller Shadowshaper and its upcoming sequel Shadowhouse Fall, this novella of mystery, love and loss will draw you deep into Daniel José Older's magical Brooklyn.

"A Brooklyn with a heart that pounds as mightily as the characters Older has created." -- Bustle

Trying to shake off the strange malaise that separates her from even her girlfriend Izzy, Tee decides to take over the Bed-Stuy Searchlight for the summer. But then she finds an alluring violet dress in the newspaper office, and a cute ghost girl no one else can see.

Izzy can tell Tee's drifting away from her -- she misses Izzy's shows and skips shadowshaper practice -- and she won't stand for it. Yet when a girl goes missing in Bed-Stuy, Izzy needs Tee to get the word out and help investigate. Can they break through their distance and reconnect before someone else dies?
Daniel José Older