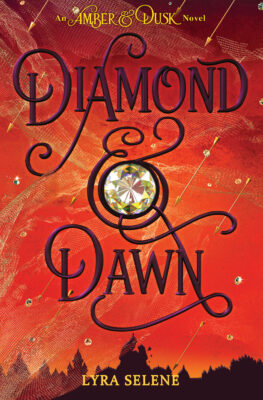 Mirage, triumphant in her coup of the Amber Empire, returns to the palais prepared to take her place as empress. With the support of her friends and a tentative, blossoming romance with Sunder, Mirage is on the cusp of taking hold of everything she has ever wanted.

However, her place in the sun is not as sure as she expected, nor is it quite as bright as she imagined.

When the Empress Severine's body was recovered from the battle, Mirage discovered she was not dead after all. Rather, Severine is in a coma, her every breath a threat to Mirage's newfound power. Worse, a distant cousin, Gavin d'Ars, appears at court with the challenge of his blood claim. As Mirage uncovers more secrets from her family's past, she proposes a series of ancient, grueling trials to determine the most deserving heir. But in Mirage's fight to defend her vision for the empire, she begins to splinter all of her alliances. Will the battle for control leave anyone untainted?
Lyra Selene

Lyra Selene was born under a full moon and has never quite managed to wipe the moonlight out of her eyes. When she isn't dreaming up fantastical cities and brooding landscapes, Lyra enjoys hiking, rainstorms, autumn, and pretending she's any good at painting. She lives in New England with her husband, in an antique farmhouse that's probably not haunted. Amber & Dusk was her debut novel.

--- - ! 'I unclenched my fingernails from my palm, crossed to the glass doors, and stepped out onto the wrought-iron balcony beyond. The music of marching wafted up -- shod hooves ringing out on cobblestones, the champagne timpani of laughter and trumpets and song. The cortège was nearly the length of the Concordat: a river of riders in uniform -- bright red and pale kembric, metal helms and dancing horses. Children ran beside the retinue, and my breath caught in my throat when I saw the soldats tossing coins to the onlookers. The procession was heading straight for Coeur d''Or''s gilded gates, flowing up the shallow steps like a sunlit river.

They finally came close enough for me to make out faces, and that''s when I saw him.

He rode tall and straight at the head of the procession on a prancing chestnut stallion. Even from here I could tell he was handsome -- a bright smile laughed in a golden-tan face. Unlike the rest of the riders -- who wore pale surcoats splashed in red -- he was clad in kembric armor forged so that the sun hammered sparks off it. His dark mahogany hair seemed to glow, as though woven through with threads of ambric.

He shone so bright it was hard to look at him straight on. He looked like --

A wave of sickly heat wafted off Sunder, slapping the back of my neck with the stench of bloody snow and icy metal.