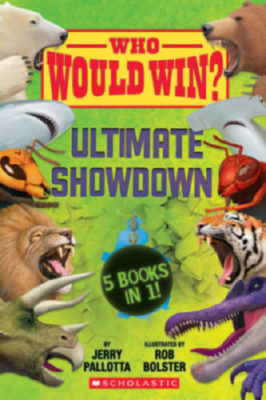 Who Would Win?: Ultimate Showdown

What if one dangerous animal had a fight with another? Who do you think would win? In this five-book bind-up of the popular Who Would Win? series, kids will learn about each animal's anatomy, behavior, and more. Then compare and contrast the battling pairs before finally discovering the winner! This nonfiction collection is full of facts, photos, and realistic illustrations, and it includes a range of mammals, sea creatures, insects, and dinosaurs to satisfy all kinds of animal fans, including Lion vs. Tiger, Hammerhead vs. Bull Shark, Polar Bear vs. Grizzly Bear, Hornet vs. Wasp, and Triceratops vs. Spinosaurus.

So who do YOU think would win?
Rob Bolster