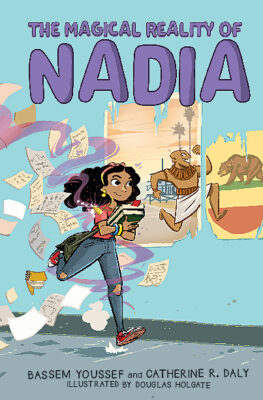 Magical Reality of Nadia, The

Nadia loves fun facts. Here are a few about her:

• She collects bobbleheads -- she has 77 so far.
• She moved from Egypt to America when she was six years old.
• The hippo amulet she wears is ancient... as in it's literally from ancient Egypt.
• She's going to win the contest to design a new exhibit at the local museum. Because how cool would that be?!

(Okay, so that last one isn't a fact just yet, but Nadia has plans to make it one.)

But then a new kid shows up and teases Nadia about her Egyptian heritage. It's totally unexpected, and totally throws her off her game.

And something else happens that Nadia can't explain: Her amulet starts glowing! She soon discovers that the hippo is holding a hilarious -- and helpful -- secret. Can she use it to confront the new kid and win the contest?

From political satirist and comedian Bassem Youssef, aka The Jon Stewart of the Arab World, and author Catherine R. Daly comes a humorous and heartfelt story about prejudice, friendship, empathy, and courage.

A former editor at Disney, Harper, and Scholastic, Catherine Daly has written many books for young readers, including the Petal Pushers middle-grade series, the Disney Fairies chapter book Prilla and the Butterfly Lie, and popular paperback titles such as Whiskers, Knights, All Aboard Cars, and Daddy and Me. She lives in New York City with her family.

Douglas Holgate is the illustrator of Something's Amiss at the Zoo by Jen Breach. He is also the illustrator of The Last Kids on Earth series by Max Brallier and Wires and Nerve, Volume One by Marissa Meyer. Douglas lives in Melbourne, Australia, with his family. Visit him online at skullduggery.com.au.

Bassem Youssef, aka the Jon Stewart of the Arab World, was a heart surgeon in his home country of Egypt before becoming the host of AlBernameg, the first political satire show in the Middle East. He has appeared on The Daily Show, The Late Show with Stephen Colbert, and other late-night shows, and was also featured in TIME 100, Time magazine’s list of the one hundred most influential people in the world. He lives in Los Angeles with his family.