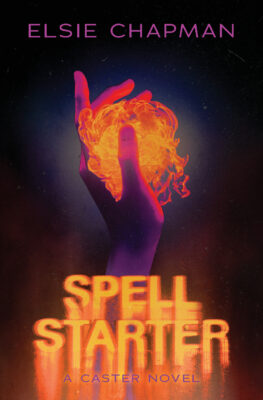 Yes, Aza Wu now has magic back. But like all things in her life, it has come at a great cost. After the tournament, Aza is able to pay off her parents' debt to Saint Willow. Unfortunately, the cost of the gathering spell she used to strip Finch of his magic has put her permanently in the employ of the gang leader. Aza has been doing little errands using real magic -- collecting debts, putting the squeeze on new businesses in the district. But that had never been the plan. Saint Willow is nothing if not ambitious and having Aza as a fighter is much more lucrative than as a fixer. Especially if she can control the outcome. Aza is going to have to put it all on the line again to get out of this situation!
Elsie Chapman

Elsie Chapman grew up in Prince George, Canada, and has a degree in English literature from the University of British Columbia. She is the author of the YA novels Dualed, Divided, Along the Indigo, and Caster as well as the middle-grade novel All the Ways Home, and the coeditor of A Thousand Beginnings and Endings and Hungry Hearts. She currently lives in Tokyo, Japan, with her family. You can visit her online at elsiechapman.com.