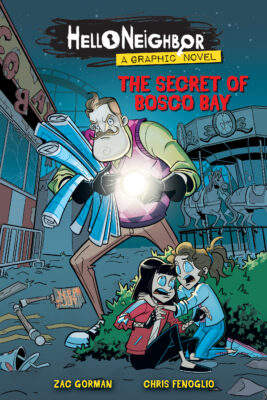 Ever since her older brother disappeared, Jen has been searching for answers. The ruins of Bosco Bay, the theme park where he was last seen, are due to be demolished any day now, but Jen can't let go of the feeling that a clue to her brother's fate still remains there.

But Jen's investigation gets complicated when her cousin Allie comes to live with her family for the summer. Allie's mom has tasked her with helping Jen come to terms with her brother's disappearance, but soon Allie comes to believe what Jen does: Jen's brother didn't just run away. And the reclusive theme park designer Mr. Peterson might just know what happened to him.

Zac Gorman is an author and cartoonist from Michigan. He received an Emmy for his work on Over the Garden Wall (Outstanding Animated Series, 2015) and was nominated for an Annie Award for his character design work on Welcome to the Wayne. His webcomic Magical Game Time was archived by the Library of Congress.

Chris Fenoglio is an artist, colorist, designer, and teacher of all things comic book. He can also muddle around enough on guitar to only be mostly annoying. He has worked on big franchises like Star Wars, Batman: The Animated Series, Goosebumps, X-Files, and Orphan Black as well as personal projects, such as his webcomic Chris and Christina.