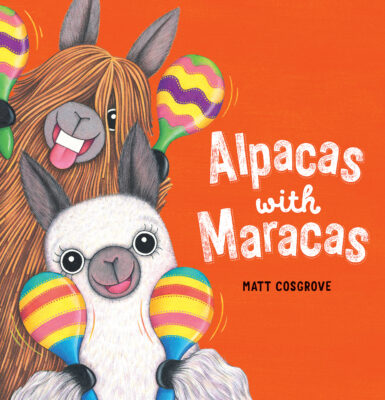 "You're a genius, Al! We don't need a big fracas!
We can't sing or play, brother, but we can shake like no other.
We just need... MARACAS!"

Macca and his best friend Al are always looking for ways to brighten their days. When they see an ad for a talent show, they're all in. But unfortunately, everything the cuddly duo tries, from singing and dancing to magic and gymnastics, is mediocre at best... until they discover the perfect act. How will the audience respond to these alpacas with maracas?

Matt Cosgrove, lover of words, pictures, and books in general, is the author and illustrator of the Macca the Alpaca series and many other books in Australia, including My Dad Is a Robot, Thanks, Mum!, and the Epic Fail Tales series. In a varied career spanning over 25 years, Matt has been the creative director of a magazine and a lecturer in comic art at Western Sydney University, and worked in television. He has also campaigned tirelessly for the inclusion of Pictionary as an Olympic sport (not really -- but he definitely should). Visit him online at mattcosgrovebooks.com.