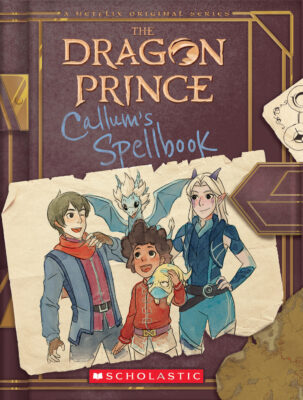 It all started when Callum and Ezran met a Moonshadow elf and discovered the egg of the Dragon Prince. So much has happened since then! The trio is on a quest to return the Dragon Prince to its mother in Xadia, Viren seems to have evil plans, and, oh yeah -- Callum's learning magic!

There's a LOT to keep track of, so Callum is writing about (and drawing!) all the things he learns in this book. Things like:
• Stats on the ELVES, DRAGONS, and other creatures they've met on their journey
• All the cool places they've been in KATOLIS and XADIA
• Funny things that happened!
• RUNES, SPELLS, and other stuff Callum needs to know about PRIMAL MAGIC (and DARK MAGIC, too)

And MUCH, MUCH MORE, including whatever Ezran, Rayla, Claudia, and Soren add when they steal this notebook from Callum!

Features original concept art not found anywhere else -- a must-have for any fan of the show!